I should have been enjoying the new car smell while reading the manual to figure out all the bells and whistles — and there are lots — on my new 2016 Ford Escape sitting in my driveway.

Instead, I found myself feeling strangely sad. Crazy, right? I thought so.

In fact, instead of playing with my new toy – there were a few errands I could run just to drive it – I was exhausted when I got home.  You know, like struggling to keep your eyes open kind of tired. So, I took an hour nap when I got home.  But I was still feeling sad.

There had to be a reason. Being the logical person that I am, I began to mentally break this down.

I’d rather go to a Trump rally than deal with one of those patronizing, condescending, less-than-truthful car salesmen who have been my car-buying experience pretty much my entire life.

So, I’ve been dragging my feet about trading back into my preferred SUV-sized vehicle for at least five of the past ten years. I found lots of reasons to keep the 2007 Toyota Corolla.

I cited the great gas mileage, even as gas prices tumbled from a high of $4.50 here in North Carolina to under $2. I reminded myself that I didn’t have a monthly car payment every time I held my breath and prayed the truck driver saw me as I squeezed past his eighteen-wheeler, every time I worried I wouldn’t make it to work because ruts might be too deep after a mere six inches of snow, and every time I stood in the Home Depot parking lot trying to figure out how to fit the crap I bought into the small car.

And, hey, she was Duke blue and her leather interior still pristine.

But, some kind of ultra-acid pooping birds that roosted in downtown Raleigh this past spring did a number on her clearcoat. Plus, an omonous noise in the front end sounded like an expensive repair to me.

And, honestly, I was feeling as old as she was in car-years. Getting in and out of a vehicle that low to the ground required slow and careful moves when my back was feeling gimpy…which seems to happen with increasing frequency as I age and every scramble on the basketball court, every dive for the home plate, every abrupt direction change to field a cross-court backhand and every time I was bucked off a surly horse seems to haunt me.

So, I sucked it up and messaged my financial-shark friend, Joye. She jumped at the chance to go car shopping with me.  Dealing with car salesmen? “That’s sport to me,” she said gleefully. So, I followed her instructions to arm myself with Internet research and price quotes from truecar.com and the Kelly Blue Book value of my trade. Wow. What a difference it made.

Much to my surprise, the salesman was a polite young man who recognized that we’d done our homework and didn’t give us a lot of double-talk. In fact, we dealt with three men who didn’t flinch (much) when Joye made them jack up the allowance for my trade much higher than I’d expected. It still took most of the day, but they gave us vouchers for lunch nearby while they detailed the car I was buying and got the paperwork in order.

Alex, our salesman, even synced my phone to my new vehicle before we left. It does everything but heat up dinner – although it might do that if you turn the seat heaters up high enough.

Because, damn it, I felt like I’d left a family member behind without even saying goodbye. Sure, I’d given her one last oil change last week and even washed her peeling clearcoat. But I’d ejected all of her cds unceremoniously and poked my hands into all her nooks and pockets to make sure I wasn’t leaving something behind, then threw her two sets of keys in the seat and dashed off to my new Escape.

I’m not sentimental about cars. I don’t name them like some people do. They’re machines, right? So, why do I feel tonight like one of those dastardly people who leave an aging pet at the pound and drive off with a new puppy?

Then it hit me.  I hadn’t left a car behind. I’d left ten years of memories.

Memories like my two-week Tour of the South with Jane Fletcher and Joanie Bassler last summer, stopping in Savannah to see Yolanda Wallace and Dita Edison before going to Shell Island and then on to the GCLS convention in New Orleans.

Memories of every Pride event  when I stuffed two tent canopies, five or six boxes of books and swag, my luggage and four buckets containing 200 pounds of sand to weight down the tents into the small vehicle. I almost thrashed Donna K. Ford for calling it a clown car once when I unloaded an ungodly amount of stuff from it at one Pride weekend.  But I couldn’t deny the resemblance.

Donna and I drove Elvis to Nashville in that car, where he found his perfect match and forever home with Catherine Woodworth.

The last picture I took of my dad was in that car. He was smiling. I had let my ex talk me into the Corolla for the gas mileage. It was out of character for me because I normally drove trucks or SUVs. So, when Alzhiemer’s chiseled away my dad’s memory those last few years,  each time I picked him up from the assisted living home to take him out, he’d ask “Whose car is this?”

My mother’s decline came a few years before his. Health issues stole her ability to walk, but she was a sturdy woman and could stand briefly enough to transfer from the chair to car. Strokes, however, feebled her mind so getting her to follow the instructions on how to maneuver into my small car wasn’t easy. Being in a parking lot at the mall and repeatedly yelling, “no, Mama…butt first…put your butt in first,” often reduced my sisters and me to giggles — Mama, too.

My brother and I rode together to our uncle’s funeral in that car last year. We’d been close as children, but differences had damaged our relationship as adults and the trip was sort of an unspoken reconciliation between two siblings who were now older and a bit wiser.

I’ve listened to countless audio books in that little Toyota, caught naps in rest areas when I was too tired to drive, picked up countless friends at the airport…carried my old Jack Russell Terrier to her final vet visit, then to the crematorium and later brought home her ashes in that car.

So, yeah. I’m a little sad that I didn’t pause for a second, lay my hand on the hood and say thanks for the memories.  I still might thrash Donna for the “clown car” comment.

But in the morning, I think I’m going to run some errands in my new Escape, breathe in the new car smell, jack up the AC so I can test the heated seats, then check the manual to see how to sync the garage door opener to my garage when I return home. I might even lay the back seats down take The Terrors for a ride. 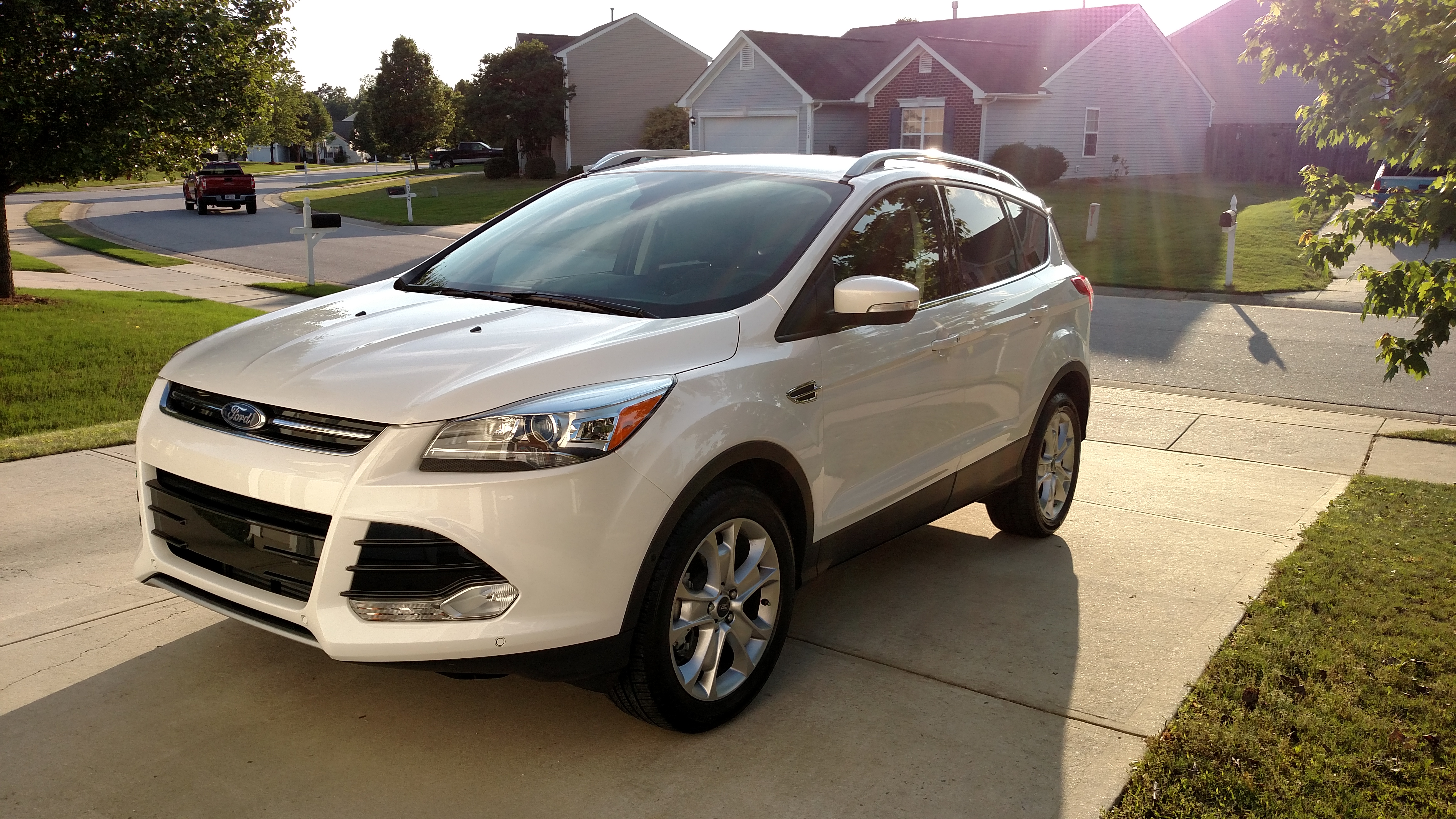